📖 “Cinder, a gifted mechanic, is a cyborg. She’s a second-class citizen with a mysterious past, reviled by her stepmother and blamed for her stepsister’s illness. When her life suddenly becomes intertwined with the handsome Prince Kai’s, she suddenly finds herself at the center of an intergalactic struggle, and a forbidden attraction. Caught between duty and freedom, loyalty and betrayal, she must uncover secrets about her past in order to protect her worlds future.” 📖 (click title for review) 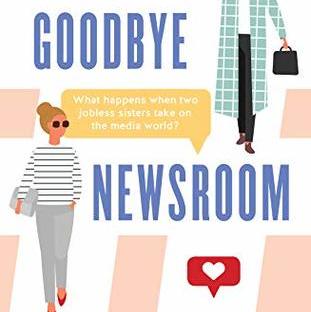 📖 Leap into the frantic and funny world of sisters Anna and Holly, out-of-work journalists who launch their own news site. Old-school reporter Anna and social-savvy writer Holly. Holly enlists Anna to help her take on her old boss, but the sisters clash when Holly insists on sharing Anna’s romantic calamities for clicks. Will they stick together and make their enterprise work – buoyed by their loyal sidekicks and the excitement of new love – or will they be a big fail? 📖 (click title for review)

📚 “On Monday afternoon, five students at Bayview High walk into detention. Bronwyn, the brain. Cooper, the athlete. Addy, the beauty. Nate, the criminal. And Simon, the outcast with a gossip blog. Only, before the end of detention, Simon is dead. According to the investigators, his death wasn’t an accident. On Monday he died, but on Tuesday Simon had planned on posting juicy reveals about all four of his classmates, which makes all four of them suspects in his murder. Or are they the perfect patsies for a killer who’s still on the loose?” 📚 (click title for review)

📚 This is the story of Jude, a human girl taken and raised in the world of the Fae by her parents' murderer. Jude, having been raised in Faerie and knowing little else, longs to belong amongst them, but most Fae despise humans and Jude and her twin sister Taryn are no exception. Their greatest enemy of all? The High Kings cruel and wicked son, Prince Cardan. Can Jude win her way to a place in Court, or will Cardan and his friends’ obstacles be too much for her? 📚 (click title for review)